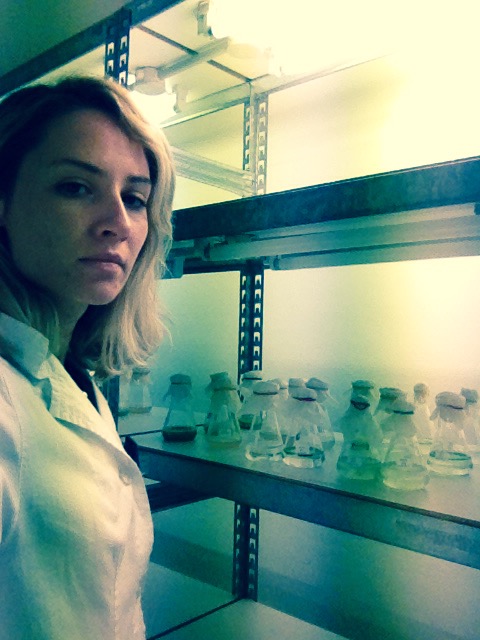 Camilla Capelli is defending her PhD in Biology 7th April 2017, at the University of Florence, Department of Biology, Florence (Italy).

Thesis title: Toxin-producing cyanobacteria in the large lakes south of the Alps: detection of new producers and molecular identification methods

Cyanobacteria represent a serious health hazard for humans and animals, due to their ability to produce a wide range of secondary metabolites including powerful toxins, among which hepatotoxins (e.g. microcystins, MCs) and neurotoxins (e.g. anatoxin-a, ATX). They are able to develop with higher biomasses in nutrient enriched and thermally stable lakes, and the occurrence of cyanobacterial blooms is increasing worldwide.

The deep lakes south of the Alps (i.e. Garda, Iseo, Como, Maggiore, and Lugano) represent the most important lake district in Italy, and have a strong economic and natural value. One of the dominant cyanobacteria in these lakes was represented by Planktothrix rubescens, which includes toxic strains responsible of the production of different types of MCs. Nevertheless, in the last decades the deep subalpine lakes went through a change in trophic status and suffered the effects of global warming. At the same time, they experienced the rapid spread of cyanobacterial blooms due to an invasive species, Dolichospermum lemmermannii, a potential producers of MCs and anatoxin-a(s). This species appeared for the first time in Lake Garda at the beginning of the 1990s and progressively, summer blooms were observed in lakes Iseo, Como and Maggiore. The exact causes which have determined these huge changes were poorly known. Moreover, besides the widespread of a large number of MCs congeners in the deep subalpine lakes, the presence of ATX was reported in all the lakes, except Lugano. In this lake district, P. rubescens was considered the main responsible for MCs production, while the ATX producers resulted unknown, which pointed out the importance of properly identify the toxin producers. Besides, the appearance of new species, the development of blooms, and the consequent potential increase of cyanotoxins can impact the safety of water resources for human use.

The general aim of the PhD project was to identify, at species and strain level, cyanobacteria producing toxins in the deep lakes south of the Alps. A multidisciplinary approach, including taxonomic, phylogenetic and metabolomics analyses, was undertaken on environmental samples and isolated strains, to fill in the picture about the distribution of the dominant toxigenic species in one of the most important lake district in Europe. The project was developed on selected target species, resulted the most nuisance taxa in the deep subalpine lakes in this decade, D. lemmermannii and Tychonema bourrellyi.

In this study, the pelagic Oscillatoriales T. bourrellyi was identified in Lake Garda for the first time and afterwards, in the other deep subalpine lakes, except Lake Lugano. In all these lakes were identified toxic genotypes, able to produce both ATX and homoanatoxin-a, which were probably the responsible of ATX levels in these basins. In Lake Garda, the quantitative determinations on environmental samples, showed the greater importance of this species. Besides, the analysis demonstrated the increase of ATX and the opposite trend of MCs.

The study of D. lemmermannii revealed its ability to develop with high biomass in the warmest months (>15°C), although with a low contribution to the total epilimnetic cyanobacterial biovolume. The analysis of the distribution of sub-fossile akinetes preserved in deep sediment showed the establishment of this species in Lake Garda around the middle of the 1960s, which was concurrent to the rapid increase in total phosphorus and water temperature. The spreading of D. lemmermannii from northern regions towards southern Europe, raised concerns due to its ability to produce cyanotoxins. Nevertheless, this study demonstrated the inability of populations settled in the deep subalpine lakes to produce a wide range of toxins. On the contrary, MCs production was observed in North European strains. Differences in D. lemmermannii genotypes resulted highly influenced by geographic distance, and the establishment of phylogenetic lineages adapted to specific habitats was likely favoured by the contribution of geographic isolation, physical barriers and environmental factors.